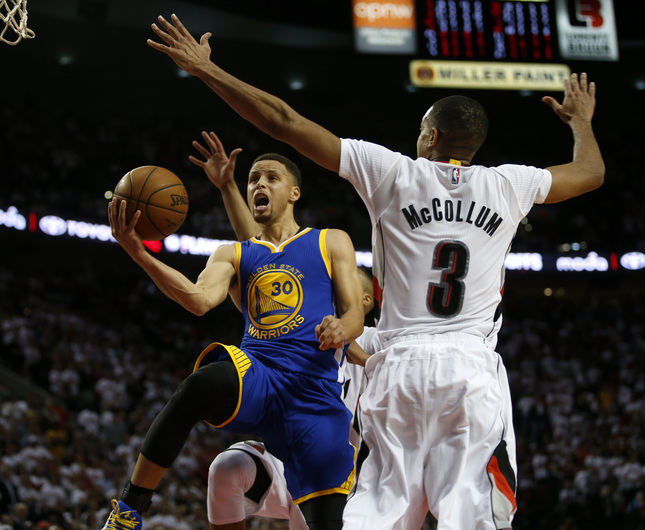 Yesterday morning I wrote that the late Golden State-Portland games were hard to stay up for with the absence of Steph Curry. For most of the day I had the same internal debate that I have most days of the NBA playoffs – do I stay up, do  I sleep, do I record the game(s)? Well about an hour before tip, Curry was announced as active and available, and my questions were answered.

Giddy with excitement, I finished watching the (ugly ugly ugly) Raptors-Heat game, cozied up and got ready for another long night. And what a long night it was. Thanks to some hot shooting from Damian Lillard, the Blazers got off to a hot start; before you knew it, the Dubs were down 21-5 and the Rip City crowd was going nuts. Enter Steph.

The MVP’s entrance sparked a mini run and the Warriors closed the first quarter down 8 and were eventually down 10 at half. But it’s what happened right before half that would lead to making this night so memorable. Sean Livingston decided (rightfully so) to go off on the refs and get himself ejected. Steph, who was on a minutes limit, would now have to play more in the second half.

The Warriors came out of the locker room hot, taking a one point lead into the final frame. In a back and forth, high paced fourth quarter for the ages, Steph had 10 points and an incredible assist to Harrison Barnes with under a minute left to tie the game and send it into overtime. It was now 1:26am, I was wide awake, and I couldn’t have been happier. Oh yeah, so what happened in overtime? Magic happened.

Stephen Curry's 17 points are the most scored by a player in ANY overtime period (regular-season or postseason).

I’m just sitting over here dumbstruck. 40 points, 17 in OT, after the team looked like they forgot about the game until 5 mins before tip

This shot of #Blazers owner Paul Allen reacting to Steph's 3 tho pic.twitter.com/VlKSioSMKG