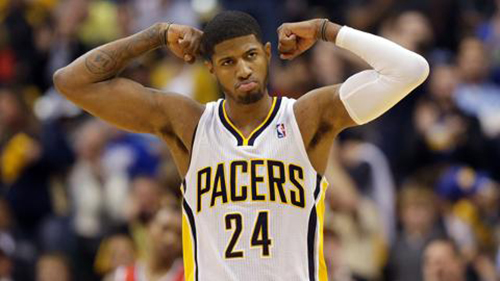 Rumors have been circulating as we get closer and closer to the draft.  Most of those rumors involve the Lakers.  It seems as though the Lakers are interested in trading their pick for an established star and are even willing to trade D’Angelo Russell if need be.  One of the names that has surfaced is Indiana Pacer, Paul George.  So the question is does this make sense?  Should the Lakers trade their pick for Paul George?

First, a caveat: we don’t know what pick the Lakers will get and we don’t even know if Indiana is willing to trade George.  It seems likely that the Lakers will have a top 3 pick, but who knows.  If the Lakers get the first pick (sorry Philly) then that might change things, and if Indiana says “no thank you” that might change things too, but let’s acknowledge that we are having a fake conversation about a theoretical trade and we don’t know all the parts.  But for the sake of this argument, let’s just say that it’s either the second or third pick of the draft and that Indiana is willing to make the deal.  Does it make sense to trade that pick for Paul George?

This is a complicated issue with lots of moving parts, so I will try to be as clear as possible: YES!  The Los Angeles Lakers should absolutely trade their top 3 draft pick in the year of our Lord 2016 for Paul “PG13” George, currently employed by the Indiana Pacers.

Paul George is really really good.  He’s young and in his prime.  He has a career PER of 18.1, he averages about 21-23 pts/36 plus about 7 boards and 3 assists.  And here’s the thing about Paul George, here is the real reason why the Lakers should trade this pick for him: you don’t have to wonder if he’s going to be an NBA player.  There’s no way he’s going to bust, you don’t have to wonder how he will handle being in the NBA, or if he’ll develop into a real player, or if he’s capable of leading a team because he already has.

Let me ask you this Lakers fans: are you sure that Ben Simmons will learn to shoot?  Or that the reason LSU was a disaster had nothing to do with him?  Are you sure that Brandon Ingram isn’t the next Jahlil Okafor (i.e. a good offensive player who doesn’t do anything else)?  Are you sure that Dragan Bender can actually play in the NBA?  Are we even sure that Dragan Bender is a real person? (I remain unconvinced) Or that Buddy Hield isn’t just an amazing college player who won’t do anything in the NBA?  Are you sure that Jalen Brown, or Jamal Murray or Kris Dunn aren’t busts?  Do you know for a fact that none of those guys are the next Anthony Bennett, or Hasheem Thabeet, or Joel Embiid?  Because I’m pretty damn sure that Paul George isn’t.  I’m pretty damn sure that Paul George is a better player than 90% of the NBA.  Paul George makes you better today.  He makes you better for the next 5 years.  You don’t have to worry about maturity issues.  You don’t have to worry that he can’t lead a team.  You don’t have to say things like “Ya know, in another season or so, once he works some things out, I think he’ll be a really good player” because he already is!

Draft picks go wrong more often than they go right.  Some guys bust, some guys can’t handle being in the NBA, some guys have debilitating injuries.  And even when they go right, there’s a possibility that the ceiling for those players is “pretty good”.  The Lakers have been down for a few years now, it would be a good idea to eliminate some risk.  PG13 is 26 years old.  This isn’t like trading for Dwyane Wade.  This is a player in his prime.  It’s not like trading for Boogie either.   Outside of his horrifying injury in the Olympics, Paul George has been a drama free super star.  He’s done little more than play his ass off and get better every year.  He’s never posted online videos of teammates admitting to affairs.  And, this is a personal thing, but he changed his number to 13 so that he could be PG13!  So yes.  Eliminate some risk and get yourself a super star.

So what if the Lakers get the first pick?  Does that change anything.  Maybe.  The ability to pick whoever you want is hard to pass up.  But again, how much do you trust your scouts?  Because the hope in drafting someone like Ben Simmons is that he becomes the player that Paul George already is.  You hope that Brandon Ingram is the next Kevin Durant, but you don’t know for sure.  We know who Paul George is and we know what we can do.  Eliminate some guess work and go with the sure thing.  Assuming of course that Indiana is crazy enough to trade him for an unknown.