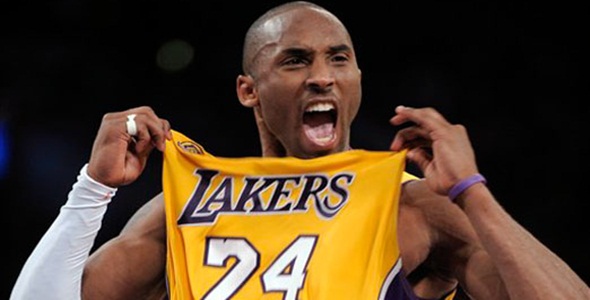 Kobe Bryant will retire at the end of this season.  This fact makes one half of our writing staff incredibly sad in the same way that a dying pet makes you sad, and it fills the other (the one who is writing this) with an endless amount of joy.  The way you feel when school lets out for the summer.  People my age are either the kind of people who name our pets after Kobe, or the kind who would rather have our kids deal crystal meth than wear a Kobe t shirt.  That is true importance of Kobe.  It has nothing to do with how well he played, or how many championships he won, it has to do with how we feel about him.  Kobe’s importance isn’t about his achievements, it’s about us.

I was born in 1985: Michael Jordan’s rookie season with the Bulls.  Jordan is an epic figure for me and most other people who care even slightly about basketball.  But there is virtually no difference in how people of my generation feel about Jordan.  He is the best.  Period.  Our feelings about him don’t go any deeper.  Jordan rose to power when I was in Elementary School and we all loved him because he was the best, and 3rd graders don’t care about on court personality or whether or not he punched a teammate.  We just want to see the best.  We also really wanted to see Space Jam.  But Kobe entered the league in 1997 and started to hit his prime around 2000, when I was entering high school.  Kobe is the first important NBA super star that people of my generation had to develop an opinion on.  We were just old enough to understand the game and the importance of aligning yourself with certain players.  Kobe was the biggest star, thus was most important to develop an opinion on.  Regardless of what team you cheer for, Kobe was a player you needed to know about and have a well established position on.  Obviously, this didn’t really matter if you were a Lakers fan or a Celtics fan, your feelings were decided.  But for everyone else in the country, you sort of had to develop a perspective on Kobe.  And what perspective you developed says a lot about you.

There are 3 perspectives on Kobe that most NBA fans have: 1) “Kobe is the best and I will root for the best at anything.”  These are the same people who love Tiger Woods and don’t hate Alabama.  These are Americas entrepreneurs and high achievers.  They love greatness in anything and will always support a dominant player.  2) “I respect his talent, but he’s a terrible teammate and I cannot support someone who is that selfish of a player because some things are more important than just scoring points.”  These are people like me: uncool weirdos who idolize Tim Duncan and obscure statistics.  We are constantly telling you why certain things are overrated and underrated.  These are the same people who go on and on about how The Replacements are the best band of all time.  3)  “Kobe is a bad person and a rapist.”  These are morally upright citizens who always vote.  They censor what their kids watch and write harshly worded letters to the editor.  These people often have very clear thoughts on why the world is ending.

That’s it.  There are no other opinions about Kobe.  If you meet someone who says “Yeah, Kobe’s fine I guess, I don’t have much of an opinion on him” that person is an alien.  If you meet another basketball connoisseur at a party and you want to know what kind of person they are (this is assuming that they are not a Lakers or Celtics fan) you need to ask them how they feel about Kobe.  Provided that they are also around 30.  That will tell you all you need to know.  Thinking about asking your girlfriend to marry you?  You’d better know where she stands on Kobe.

This isn’t to say people who disagree on Kobe can’t get along, this blog is living proof that they can, but you need to know who you are dealing with.  You need to understand what issues you see eye to eye on, and what issues you will never agree on.  No one is ever changing their mind on Kobe because their feelings about him are a part of their DNA.  It’d be easier to change your height than it would be to change your Kobe-feelings (Kobe-lings?).   He is the avatar of our worldview.  At least for those who are approximately 30 and obsessed with basketball.  Which, if you’re reading an NBA blog named after a Wilco song, you DEFINITELY are.

I realize that you can make this sort of “he is important to an entire generation” argument about a lot of NBA super stars (Tim Duncan comes to mind), but no one creates the specific, passionate, love or revulsion that Kobe does.  People will have similar disagreements about Allen Iverson, but a) Iverson’s career never reached the heights that Kobe’s did and b) people’s response to AI is more of a socio-cultural/political response.  Our Kobe reactions go much deeper.  LeBron James will go down in history as the most discussed athlete of all time, but that is mainly a coincidence due to the fact that he is the first superstar of the twitter generation.  We know everything LeBron has said or done moments after it has happened, and we devote most of our lives to studying it and criticizing it.  If LeBron buys a bagel on his way to gym in the morning, by noon there will be 10 think pieces online about it.  Kobe is different because we’ve had time to digest him and come to an understanding.  It isn’t a knee jerk reaction to something, but a culmination of years of data and feelings about his on and off the court life.  The way he attacks the rim, or yells at his teammates, or blows off reporters, or tries to break Roy Hibbert, or scores 81 points are the pieces of evidence we collect and apply meaning to in order to come to a conclusion.  Jordan was similar both in his skills and his approach to the game/life, but Jordan’s dominance came during a time when we couldn’t really analyze and discuss him.  We were just too young to think critically about him.  He’s like The Pixies.  He’s the godfather of all the things we loved (or hated).  Kobe is like Nirvana.  You can’t be older than about 26 and not have a strong opinion on Nirvana.  It is an opinion that you simply have to have.  When you think about how you want to raise your children, you need to think first about where you stand on Kobe, and go from there.  This is because our emotional love or hatred of Kobe is a view into a vital part of who we are and what we value.

The arc of basketball’s history is long.  Future generations will have their own debates.  In the same way that the 80s were categorized by the Lakers – Celtics dynamic and the 90s were about Jordan, all the little hipsters streaming Drake on their phones will be arguing about Steph , or LeBron, or Russ, or someone we don’t know yet.  The defining conflict of my generation will always be Kobe.  Partly due to timing, partly due to where he played, and partly due to his own success.  In the same way that the Star Wars prequels shattered our youth and caused us to reevaluate everything we thought we knew (sorry, that’s a whole other 1,600 word essay) Kobe is the first athlete that we consciously chose to either love or hate.  Long ago, back when we were still trying to get a date for homecoming, we were also defining our worldview for all time.

Jordan will always be the best.  LeBron will be the most discussed.  But Kobe is the most important, because he helps us to understand ourselves.  His retirement isn’t just the end of a historic NBA career, it is the end of a generation.